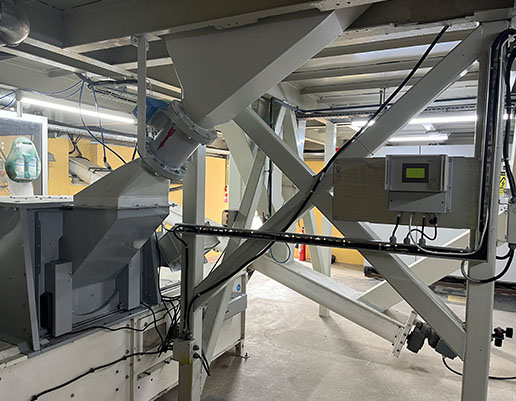 Installation: In a slide

Function: Measurement of the quantity of corn conveyed to optimise the washing process.

Our customer from the food industry prepares corn for resale after harvesting. For this purpose, the corn is first washed and dried, then stored.
The agricultural product is delivered by trucks and unloaded into a drum conveyor. From there, the corn is transported via a bucket elevator into an inclined DN150 pipe, which leads the product via a conveyor belt into the washing process.
The customer‘s goal is to be able to better control the washing process and automatically adapt it to the quantity conveyed in order to optimise the addition of water and detergent and save energy. For this purpose, the quantity of corn conveyed must be measured.

Previously, corn was measured with an impact weighing system, which has now been replaced due to drift and inaccurate measurements.
A MaxxFlow HTC is now used, which measures and monitors the actual amount of corn conveyed. The sensor was developed to measure quantities from a few tonnes to 300 t/h continuously in free-fall or inclined lines.
In this application, the MaxxFlow HTC was installed in an inclined line that is continuously filled with material via a bucket elevator and transports the corn from the drum conveyor into the washing process.
With the automation of the washing process by the MaxxFlow HTC, the customer can now reduce the energy, water and detergent used and thus reduce costs in the process.

Other application examples with the MaxxFlow: