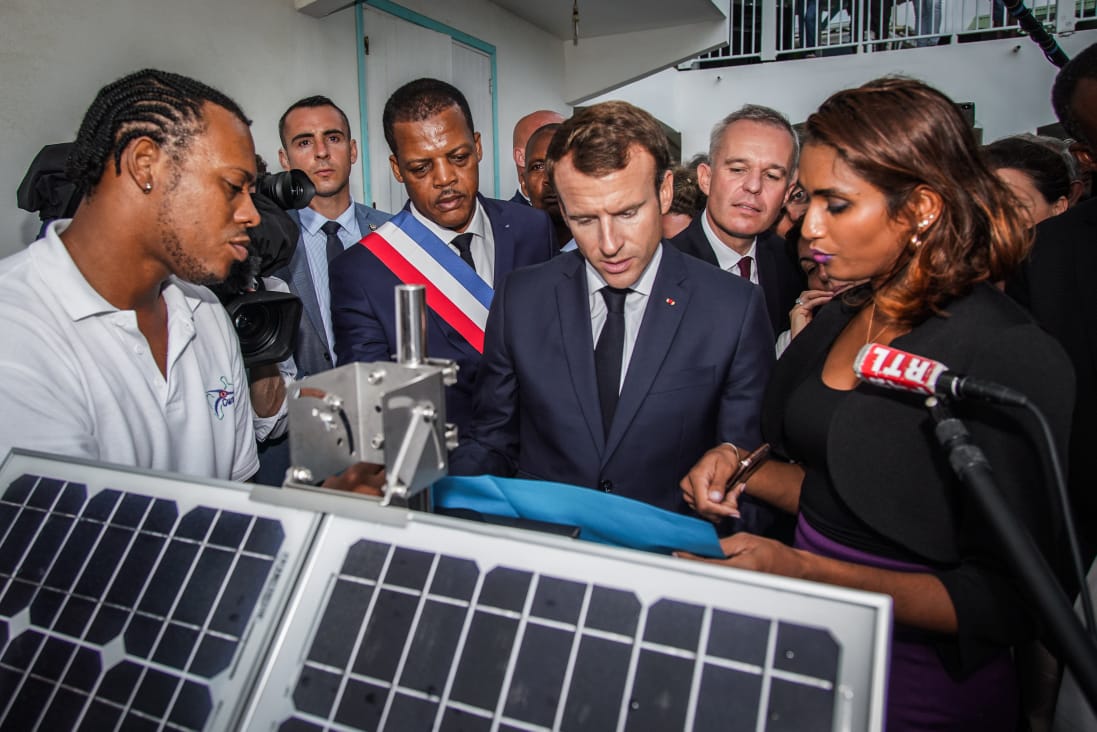 The new network of 24 Cairnet stations to measure the Sargassum algae gas emanations provided by ENVEA Cairpol and installed by Gwad’air end of August has been inaugurated by the French President Macron during his trip to the Antilles this Friday, September 28th. Read more on the Cairnet network

The inauguration of the Cairpol network of Gwadair by President MACRON during his visit to Guadeloupe on 28/09/2018 with the director C. Raghoumandan and E.Cilly, Gwad’air’s technician

Following the update of health recommendations and the management measures of the High Council of Public Health (HCSP, France), the Regional Health Agency and GWAD’AIR (Approved Association for the Monitoring of Air Quality) have deployed a network of air quality sensors to measure hydrogen sulfide (H2S) and ammonia (NH3) issued from the decomposition of Sargassum algae.

Sargassum beaching events are new to many residents in the southern Caribbean, Brazil and West Africa, but are well known in the northern Caribbean islands, the Sargasso Sea and the Gulf of Mexico (especially Texas and Yucatan Peninsula with its well-known Cancun beaches). Sargassum emits hydrogen sulfide gas as it decomposes onshore, releasing toxic and highly flammable gas smelling like rotting eggs. Inhaling it in small doses can affect breathing, cause headaches and pose serious threats to health. It also corrodes electronics and other equipment.

These algae invading the Caribbean coast since their massive appearance in 2011 had pushed the former French minister of the ecological transition Nicolas Hulot to go on site in June, together with the Minister of Overseas Annick Girardin and announce a 10 euro million over two years plan with the aim of reducing the collection period of algae to 48 hours.

As a consequence of the plan, the existing air quality monitoring network has been expanded in August with the addition of 24 new Cairnet stations deployed across 24 sites on the Atlantic coast. Each station is containing Cairsens sensors for the measurement of H2S and NH3 and is equipped with solar panels and batteries in order to be completely self-sufficient and highly mobile. Their complete GPRS communication system automatically transmit data to the CairCloud, the ENVEA’s Cloud data processing application. The recorded real-time concentrations is daily reported to the public through the DEAL (Directorate of the Environment, Planning and Housing) and the Gwad’air websites. During his trip to the French overseas territory Guadeloupe on Friday, President Emmanuel Macron reassured residents that he was committed to address the problem “the best way to protect everyone is to pick up the sargassum algae as quickly as possible, within 48 hours after it washes ashore or even before it runs ashore, to prevent any damage or sanitary problems.”

The monitoring of emissions from the decomposition of Sargassum algae with Cairpol sensors it is not an unknown fact. Measurements of H2S and NH3 concentrations carried out at the national level by the French Air Quality Monitoring Organization AASQA near natural sources such as the degradation of green algae (Brittany littoral) or Sargassum algae (Martinique, Guyana) are in place for several years and have been the subject of several publications and reports such as:

In 2015 already, the ARS Martinique (Regional Health Agency) was commissioned by the Prefect of Martinique to set up, with the technical support of Madininair, a sensor based monitoring network of hydrogen sulphide and ammonia concentrations in urbanized areas impacted by sargassum beaching.

The 3 main objectives of this sensor network are:Operational since September 2015, the Cairnet measurement network, enables real-time and continuous monitoring of H2S and NH3 concentrations and is managed daily by Madininair. Based on ENVEA-Cairpol Cairclip type sensors, the Cairnet stations are installed on sites defined by the ARS, in the immediate vicinity of dwellings and at 1.5 meters from the ground so that the measure is representative of the exposure of the populations living on the coast. The selected sites are areas of dense habitat strongly impacted by strandings of Sargasso, sensitive sites (eg nursery or school near coastal areas regularly exposed) and areas where the collection of algae is difficult to handle. The sensors can, at the request of the ARS, be moved to other sites also impacted by massive strandings.

The measurement results on Sargassum algae is published daily on the Madininair website here: “Daily update on H2S and NH3 monitoring measures”

We take this opportunity to thank the two Air Quality Monitoring Organizations, Madininair and Gwad’air, for their renewed confidence and the remarkable work they have done.