Christophe Chevillion, CEO of the Environnement S.A Group, joins the official delegation accompanying the President of the French Republic during his first state visit to China, under the banner of the environment and commercial partnerships.

Emmanuel Macron left Paris Sunday, January 7 for a three-day visit to China, in order to establish a personal relationship with his counterpart Xi Jinping and build an alliance concerning issues like the environment, the war on terrorism, North Korea or Syria. The French president expects to announce the signing of contracts and agreements in Beijing during his visit.

Accompanied by the First Lady, Brigitte, who is very popular in China, Macron has taken along over 50 entrepreneurs, including those of AccorHotels, LVMH, Airbus, Areva, Environnement S.A, BNP Paribas or Safran. This is the first state visit of a European leader since the Chinese Communist Party congress, which strengthened president Xi Jinping’s stature in October. 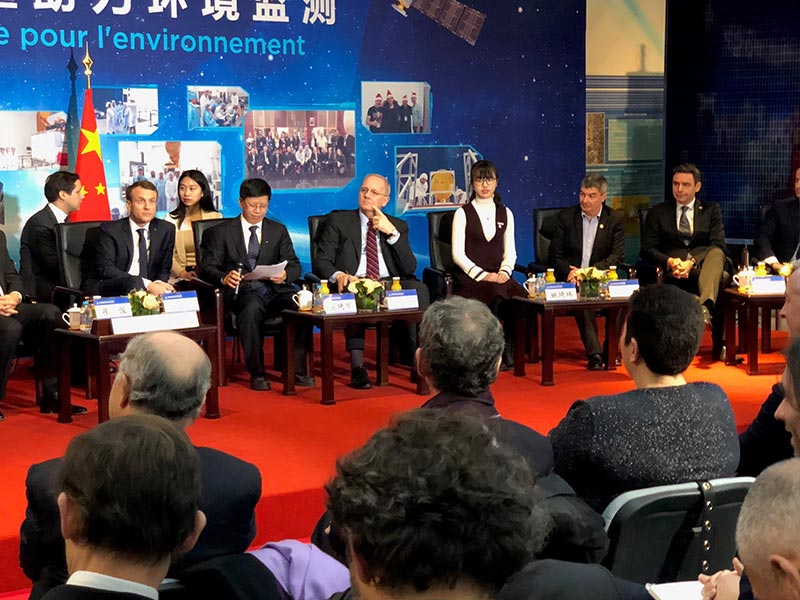 Christophe Chevillion, CEO of the Environnement S.A Group with President Emmanuel Macron at the climate conference in China

One of this trip’s goals is to develop a greater cooperation between both countries on the protection of the environment; the fight against global warming being one of the topics addressed by Emmanuel Macron for his first speech in Xian. In reference to the partnership between France and China on this issue and regarding Donald Trump’s decision to withdraw the United States from the Paris agreement on global warming, the French President has offered China a proposal to “relaunch the climate battle” and “prepare an enhancement of our commitments” against global warming, at the next COP24, planned to take place in Poland at the end of the year. He announced the organization of a “Franco-Chinese year of ecological transition” for 2018-2019. President Macron pointed out that without China’s decision to stay, “the Paris agreement would not have survived” the American decision, while noting that China remains the country with the highest greenhouse gas emissions. “Our destinies are tied”, he said. “The future needs France, Europe and China. We are the world’s past. It is up to us to decide to become its future”, he assured.

Environnement S.A, the leading European manufacturer of on-line environmental monitors whose headquarters are based in Poissy (France), has been a Public company since January 2006, is listed on Euronext Growth. Founded in 1978, the Environnement S.A Group provides monitoring solutions in the fields of air quality, industrial process control and emission, engine gas, water quality and radionuclide. These solutions designed and produced throughout the different companies of The Group are promoted since January 2018 under the trademark envea™.